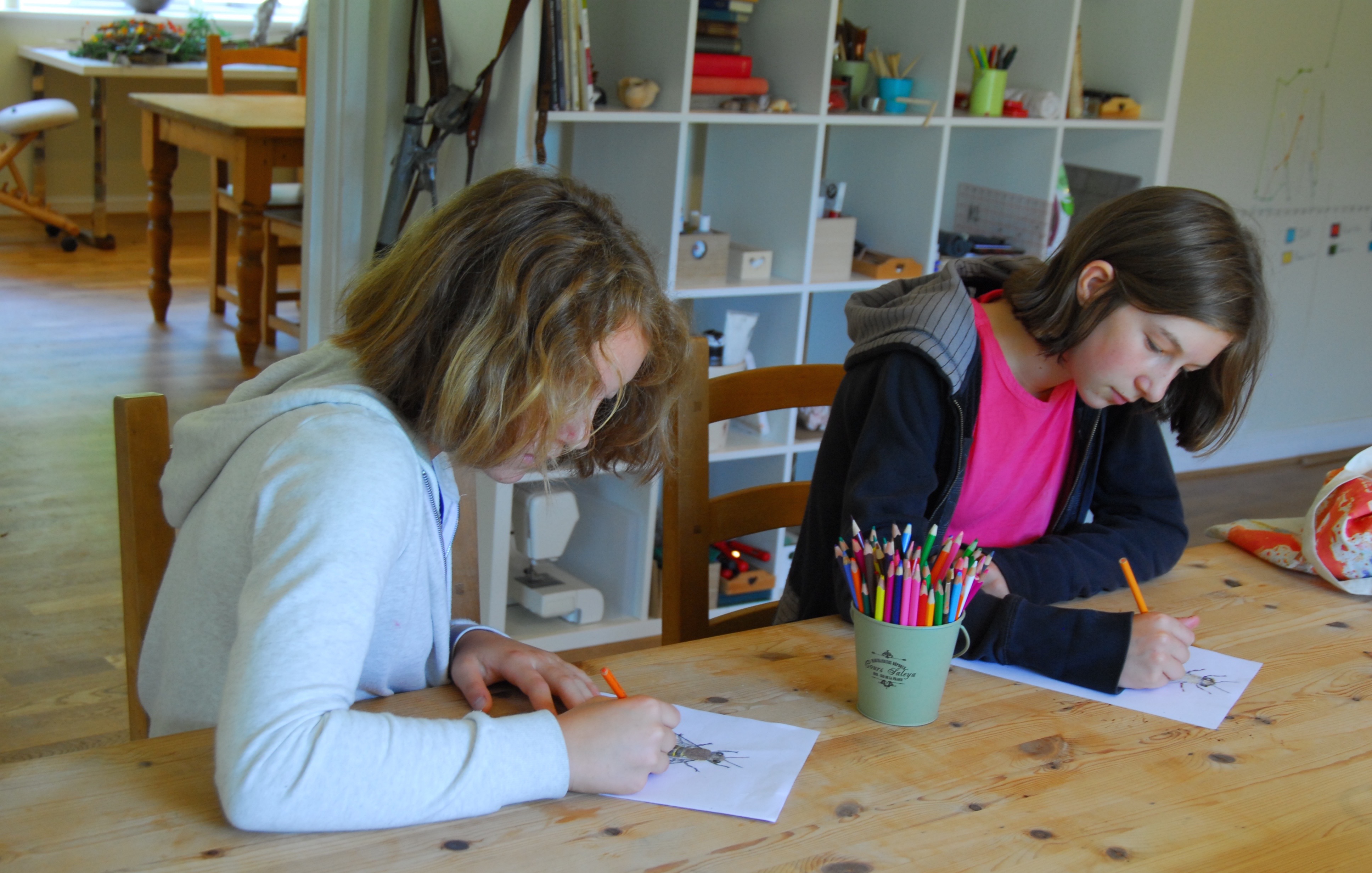 One of the joys and privileges of working with young people in the Montessori approach is that it offers the unique possibility of accompanying them in their discovery of who they are. Spending these days with them – from early in the morning to late in the evening – is a special privilege.

I suppose what is unique about this space is that we have a group of bright kids – I mean, they are intelligent, socially conscious young people, many of whom would be at the top of their class in a traditional school – in an environment which offers them a considerable amount of freedom. It offers us the opportunity to study what normal development is like. In that sense, we are discovering who the adolescent really is.

A question that parents ask me is what happens to the intellect at the onset of adolescence. The child of 12 is at the peak of their mental powers in some sense – organised, rational and stable. And then puberty comes along. There are vast changes taking place, quite abruptly, in their body. The intellectual function appears to decline.

My observations of infants over the years has shown me two things about development. The first is that development is not linear – there are periods of slow growth, and periods of accelerated growth. The second is that the child has energy enough to focus on one thing at a time. It would appear for instance in some infants that their language development is slow. But observe their movement – they make huge strides in that area. So development has to be considered both holistically – the whole child – and over time.

With young adolescents, the great changes in their body mean that their attention shifts from their mind. They reinhabit their body – it is like moving into a new home. Remember the last time you moved home. Your focus is quite naturally on settling into your new home. If you are cooking in the kitchen, your hand reaches for the salt – but it is no longer a familiar movement, the hand moving to a familiar place. Your conscious mind has to take that extra split second to locate the salt. In time it will become unconscious. Some mornings I cannot remember if I turned the iron off – I have to look, and yes I have. But I was not conscious of turning it off – I just did.

As the house that they inhabit changes, they have to become reqcquainted with it. That is why anything that involves their body is so valuable. They have so much power and energy, they are tireless. They need physical movement, big movements, large movements. I have observed that they are not even sure of what they are capable of – they are surprised and amazed by what they manage to do. I ask a couple of them to shift a huge pile of compost in the afternoon. They looked incredulous – one of the others said “Paul remember they are just 12 years old” – it made me laugh. They got it done in one hour.

My observation is that young adolescents are once again wedded to the concrete. There is an incredible surge of energy and power, but it operates in the concrete – in their physical reality. It is a sad thing to tie them down to paper and pencil – it is like a lion in a cage. You never see their power. It is particularly despairing because they do not recognise themselves as lions – and they start to see themselves as beings without power. I love to see them in their power. Last week we spent the day at the Tate. They organised the whole thing. At 630am I came downstairs and they were in the kitchen making packed lunches. There was an atmosphere of dynamism and aliveness, it was incredible.

Another significant moment in the past week was with the water butts. We had 15 water butts in the carpark waiting there for 18 months. Nothing happened because we are all so busy. But it had not occured to me – despite my immersion in this world – that the young people could get it done. When shown how, within 2 hours the water butts were all in place. You could never ask a 12 year old to do that. But by the time they are 13 and 14 – wow! Can you imagine the shift in self-confidence when a 13 year old does an adult job? That is what they need. They need to experience themselves as having that kind of power. You want them to be shocked by how incredible they are. Because they are incredible.

When I say that they move into their body it is not that their intellectual capacity diminishes entirely. It is true that their memory changes. They forget things that they learned earlier. They forget simple instructions. They need much more support with things like that. In little ways they show that their minds are not the same. But their intellect is incredibly swift-footed. It is sharper. There is a contrast between the memory, which seems to weaken, and the actual capacity to think clearly, which seems to strengthen. I hope that makes sense. Thought is a powerful tool in their hands. Memory is not. But thought is.

I am often put on the spot because their thoughts operate way faster than the speed of light. We have the most incredible conversations – about the interpretation of art, about a person’s right over their own life, about the value and importance of money. They have a probing intellect, and have none of the vested interests that adults have, so they make delightful conversationalists. I am completely present and alert in my conversations with them, because they are. Their presence demands mine. Any weakness in the train of thought is seized upon. The argument has to be water tight – but if it is water tight, it is accepted and embraced. It is as if the previous stage of their lives, of developing the intellect, has now put this power at their service. They use this power of thought to ask the big questions.

Young adolescents have this extraordinary combination of being passionate about the big questions while also being pulled into the silliest sense of humour. That is one of the reasons they are so much fun to be around.

My observation is that they are able to follow a fairly complex line of argument in connection with a social phenomenon – that is, one human’s relationship with another. Our young adolescents read and devour the print edition of the New York Times (international) each day. They are avid readers and writers. They show passion and deep engagement with their work, especially work that has a social dimension. By social I mean work that affects others. Their social intelligence is in sharp focus. They notice the most subtle aspects of the social dynamics. They are highly sensitive to this. It is like the 2 week old baby’s sensitivity to black and white; the 1 year old’s sensitivity to language. It is just something they are incredibly sensitive to, and it has a function and a purpose, and one that we would do well to respect. The more we can place the social dimension at the centre of their daily experience, the more we give them what they truly need to develop and grow to their full potential.

I think a particular form of slave labour is to make them repeat calculations and so on using worksheets. It is incredibly tedious work for them. The younger child finds joy in exercising their reasoning mind and will come up with more and more exercises that involve repeating calculations etc. for the sheer joy it brings them. Adolescents are not called to doing that anymore – that stage of life is past. It is like asking why the toddler who loved nothing better than to walk stops being enamoured with walking. That time is past. Before they walked for the sheer joy of walking. Now they walk for a purpose.

In the same way, the adolescent no longer wishes to calculate for the joy of calculating. There is no joy in it. I had the opportunity to see a students Year 7 physics notebook from a conventional school. It was filled with demands to calculate velocity given time and distance in different units. It is a special kind of torture. This incredbily intelligent 12 year old is bored to death of Physics as a result. It is a shame, but there it is. Adolescents seek meaning and purpose – they are asking existential questions, and we give them pages of calculations to do. It really is absurd and a complete misunderstanding of the nature of the age.

Yet the same girl spends hours each week building excel models of the community’s food costs for the week, and takes quite a lot of pride in her role as the “Kitchen Manager”. It is clearly not the repetition of calculations that tired her out. It is the absolute disconnection to meaning and purpose in her life.

So when asking about the diminishing of the intellect in early adolescence, I would say that memory possibly diminishes but intellectual sharpness takes a huge leap forward; and there is a new and unforgiving demand for meaning and purpose – as there should be. The life of high ideals, taken to their logical and extreme conclusion, comes alive, and the young adolescent is unable to do anything but submit themselves to its fire.