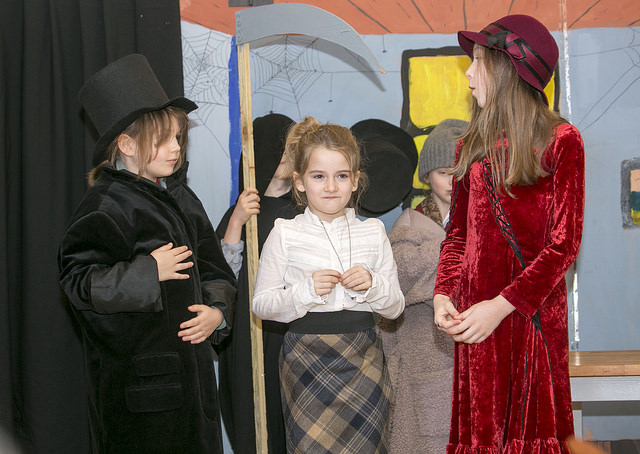 The past, the present and the future are splendidly framed at this time of the year as the calendar ticks around.   Here at The Montessori Place it is a natural time to reflect back over the last term and look forward to the next.

The end of a term is always a bustling time and the Autumn Term particularly so with the festivities around the last day. Alongside the traditional plays and potluck lunch – arranged so efficiently by Kristin Magnusson – this year we also added the Christmas Fayre which was so inspiringly coordinated by Tara Grant. Like Santa’s helpers, many others contributed to a wonderful day; the Family Room paper-chain gang, the Supplier of Chairs, the Fetcher of Plates and the team of washer-uppers. The food and fayre combination added a whole new dimension, allowed for so many lovely moments, and raised over £70 for Bristol Zoo’s penguin appeal. A memorable moment for me was Ingrid asking if I could grab a glass of water for her – “Rob, I can’t leave the biscuit icing – business is booming!”

We also had the pleasure of hosting Robert Longstaff who kindly allowed us to use his artwork on our traversing wall; so lovingly recreated by Lisa Creagh and her team of (mainly) infant community mums, and so enthusiastically traversed by all the children once Matt Roberts had worked his magic with the holds. The traversing wall is so impressive that some of the artwork from it managed to sneak into the picture yearbook for the last academic year. I hope everyone got the copies of the yearbook that they wanted. If you missed the flurry of emails about it, and want more copies, you can contact Karen or Zoe Coker who spent many happy hours sorting and selecting hundreds of photos.

The children’s plays, too, are always such collaborative events; first the children’s cooperation – learning 2000 words between them in the Elementary play, the coordinated movements of the Children’s House, and the behind the scenes the work of each parent and child with their costumes, help with the lighting (Dan Findlay) and sound (Mark Treffel), help from our (almost) resident milliner Naomi Ibbotson and, finally, all the lovely video and photos (Caspar Firth and Dave McHugh).

And so to the present. In amongst the festive days, The Montessori Place has been busy as we go about the little enhancements that we so enjoy.   New wall hangings are going up and storerooms rearranged, but much of the attention seems to have fallen on the animals. We are blessed to work with a dedicated Cuban team who help with various maintenance and construction projects of which there is a constant stream. They are not just builders. Orlando is a Professor of Mathematics back home, but yesterday he and Alberto were dangling a worm to lure Snowy and Glosette up the new hen ladder they have built so that they could check the rung spacing was just right. I, meanwhile, was in my element creating a gently sloping ramp between levels one and two of our double-decker guinea pig habitat. Pebbles and Cracker have shown that absence can make the heart grow fonder. Vicious fights necessitated separate accommodation over the summer but winter weather has forced Pebbles back inside. Happily a grudging tolerance has broken out, allowing their separate accommodation to become one.

Also yesterday a few of us Montessori folk took a walk from Hove Park up to Devil’s Dyke. I have long been intrigued by the name but took this opportunity to look into the back-story. Perhaps you know it. One version of the folktale goes like this: The Devil was determined to destroy all the churches of the Sussex Weald by flooding them from the sea. Devil’s Dyke is the start of his trench across the Down’s. Halfway through he stubbed his toe on a large ‘Goldstone’ and, in frustration, booted it towards the sea to somewhere near it’s current location at the bottom of Hove Park. His last shovel load was chucked over his shoulder to form the Isle of Wight.

Rarely has a folktale triumphed so comprehensively over a geological explanation. The freeze-thaw action of the ice-age permafrost has got nothing on a supernatural being doing some malicious gardening.

Montessori understood the transformative power of a story and, even more importantly, understood different way stories touch us at different ages. For the child in the First Plane (0-6 years) it is stories of every day life, of real events that fascinate and call them. Seeing the joy young children experience when hearing about ‘The Morning I Left My Gloves At The Café And Had To Return To Get Them’ or some such tale is always a marvel. Like the mediaeval folks trying to explain the South Down’s geology, children, too, are striving to make sense of the world. The Montessori approach invites us to become ‘storytellers of the truth’, combining the magic of the oral tradition with the magnificence of the real world.

In the Second Plane (6-12 years) a new power of the mind – the imagination – emerges, a power that allows us to make sense of that which we cannot see and touch; the past, the universe, the cell. Often the stories we tell at this age have cosmic twists, placing the parts in the context of service to the whole; blood, for example, is a ‘great river’ that carries supplies to the farthest corners of a kingdom where all the inhabitants (who number more than the population of the world) work unceasingly.

All of these story themes, the digging of a trench, the trip to a café, the flow of a river are rooted in our everyday lives and landscapes. Despite the gifts of civilisation, they reveal what sensorial beings we are and how, at different ages, our minds can abstract and add meaning in different ways. Developing an approach to the discovery of the world that is based on the different psychology of the child at each stage of their development is perhaps Dr Maria Montessori’s single greatest contribution.

And so to the future. Exploring the uniqueness of each of these stages will be the focus of the Parent Study Groups that will this year roll out across each age group.   One study group has nearly finished the first module “What is Montessori?” with one more session so go on the 21st January. The second, third and fourth modules, each made up of four evening sessions will run concurrently, the first sessions on the 25th February, the second sessions on the 25th March (all 7.30 – 9.30 pm). Since they will be running at the same time, you will have to choose between The First Plane (0-3 years), The First Plane (3-6 years) and The Second Plane (6-12 years). We will run these mini-courses at the same time each year so that over a few years you can complete the ‘Full Monty’!

Other dates for your diary this coming term are the three ‘The Week That Was’ events where we give you a taste of life in one of our three communities over that week. The Infant Community will be on 5th March, the Children’s House on the 12th March and the Elementary Community on the 19th March (all 7.30 – 9.30 pm).

Returning to the theme of sensorial experiences, the annual Spring Walk is on Sunday 29th March, 9.30 – 1.30 pm in Stanmer Park.

If all that seems a little far away and chilly, then why not come along and warm your soul with The Montessori Place Community Choir – for adults and children alike – inspired and led by Mark Treffel (Louis’ dad). The inaugural session will be at 11am on Sunday 18th January. Mark has put together some music for the first song ‘Down by the River to Pray’ from ‘O Brother Where Art Thou’ – more links and details are in his email from 3rd December.

We will be intensifying our search for a site this year, continuing with our twin track approach. The first strand of this involves working with a backer who has in principle agreed to buy the land the school will need. The second strand entails seeking collaboration with existing estate owners in Sussex who want to diversify to keep their estates intact.

Our long-term goal is to offer a strong and stable Montessori programme from birth to eighteen. With that in mind we will be opening a second Children’s House later this year, and anticipate the need to expand the space for the Elementary Community the year afterwards.

We will give a full update on these plans on the 7th March. This was scheduled to be in London and co-hosted with the Maria Montessori Institute but we will now be holding this at The Montessori Place on the Saturday afternoon.

Looking further ahead I have enclosed the term dates and fee information for the next academic year, September 2015 – July 2016.

Warmest wishes for the New Year,