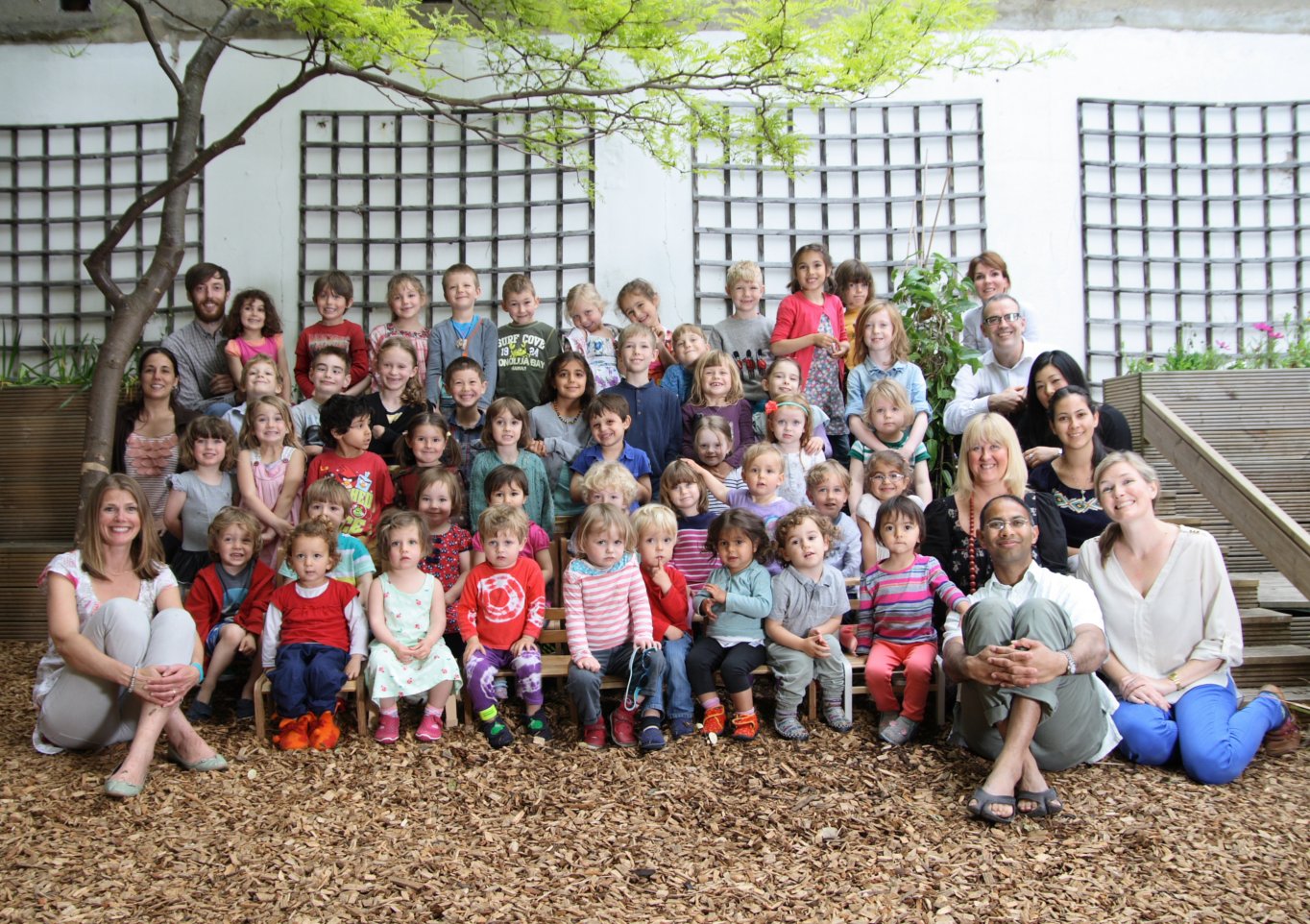 There is a chap called Dunbar who studied various primate societies to find out the typical size of their social groupings.  For human beings he concluded that 100-200 people (the “Dunbar number”) is the size that allows for meaningful active relationships to be maintained, and that 42% of our time is spent on social grooming (i.e. chatting and doing nice things for each other).  The size of our Montessori community is about 150 so he seems to be right about that, though I think we got well above 42% when we camped together on Johnny’s field.

Apart from a handful of families (we missed you) everyone was there – different ages, different backgrounds, different skills and different beds: from hammocks to glampervans.  The following week Owen, Arthur, Boudicca and Cassius all created various sorts of maps and collages that spontaneously focussed on the colourful array of tents, vans and cabins.  I was reminded of the chart we use in the Elementary Community representing the Fundamental Needs of Humans; every human family that has ever lived has had certain needs – for clothing, shelter, food, transportation, culture, defence – but we meet them in different ways.  Each different tent or van arrangement so beautifully captured our individuality (under the trees or in the open; garden furniture or simple rug), but our shared experience made it a community.

Even before we went camping, the feedback forms suggested that the sense of being part of a community is one of the ‘most liked’ aspects of The Montessori Place.  I see that cohesive community energy all around: in the Family Room, on the community emails, in the Book Club, discussion evenings and in all the little get-togethers that pepper our day-to-day lives.

That spirit of cooperation is also apparent in the children’s communities. During a recent Chess Club session I overheard Cassius explaining to Tullia why a particular series of moves would be more effective in defending her king from his attack.  His suggestion was only partially understood and then only partially followed; yet both benefited from that brief moment.  As that moment came back to my mind later in the day, what stuck me as significant was not the kind or quantity of knowledge that was passed on, but the experience they each had of being in a cooperative relationship.   I suppose that just as wind is the movement of air from areas of high pressure to low pressure, it is the imbalance in age and ability that facilitates – even necessitates – a flow of ideas, service and kindness.

There are so many of these little moments that fill the day at The Montessori Place; a two year old getting a glass of water for a one year old, a four year old polishing every pair of shoes he can find, a passing comment from an eight year old about how beautiful a younger friend’s handwriting is.   I see each of these actions as an expression of love and a sign of a warm and happy heart.  I have found that love is something that can’t be taught, that it is something that arises naturally in the human heart, but that we can create a space which encourages its expression.

It seems to me that there are three aspects of The Montessori Place that are conducive to its being such a space. Each community has a small and stable number of children (a sort of Dunbar number?), the children are of mixed ages and abilities, and there is a culture that guides their relationships with one another. It is this combination that shapes the community into a space where the children can live and grow – in love and to love.

This first of these is perhaps most striking in the Infant Community.  Compared to other experiences for children of this age, the Infant Community is unique in asking that all the children are all there for the same days and hours each week.   Like the children in an extended family who are routinely together, these little ones come to know each other and to develop a familiarity, a warmth, a friendliness towards each other.  The possibility is there to begin to see the other as fully real rather than, perhaps, as someone who exists to make me happy.  That seeing the other as real, which I think of as love, then becomes expressed through actions that we happily call ‘work’.  Perhaps we could put it into a formula: work = effort x love.

This second idea, of being with people who have different capabilities, is naturally present in all three communities: the youngest is half the age of the oldest.  Again this mirrors the tribes and clans that have formed the bedrock of human groups since our species first emerged.  Each child looks around and thinks: “There are others that are the same age as me, but most of those I consider my peers are a little older or a little younger”.   There is something absolutely beautiful about this. They don’t feel the same pressure to compete, to be part of a clique, to include or exclude certain children, or even to think in those terms. They just look around and see opportunities to be kind, opportunities to share of themselves and opportunities to receive the gifts that the others freely give.

The third aspect to facilitating community is having a culture that guides relationships with others in that group.  This is the bit the Guides and the Montessori ‘curriculum’ bring to the mix.  It is found in the suggestion in the Children’s House to do something ‘for the friends’ (i.e. everyone), it is in the acknowledgement of effort, motive and contribution over achievement.   In the Elementary Community the children routinely discuss why they are there – broadly to have fun, and to work.   Basic rules are then proposed and agreed that will allow this.  A natural respect emerges out of this genuine shared authority. And because the children are valued and respected in this way, that becomes the norm for their relationships with others.

It’s lovely to know that an appreciation of community is important to so many of you, lying as it does at the centre of our approach.

So thank you to all of you who returned the feedback forms in July.

Along with community, there were other areas of agreement on the things you liked – more so than on the things you would like to be different.  Of the things that you liked, four things clearly stood out; the community feel, the guides, the happiness of the children and the parent education sessions.  Of the things you would like to be different, two points were made by more than 5 people; better communication on big stuff and more updates, pictures and videos of the children.   There were many other helpful suggestions and ideas made by one’s two’s or three’s of you that we will aim to respond to individually.

‘Better communication on the big stuff’ we understood to refer to staff changes in particular and perhaps updates on the secondary school and the like.  What happened last Easter was unusual in its circumstance and timing, and we do not foresee a change like that happening again. However the point is taken, and we will make the time to share more fully and openly with you our vision for The Montessori Place, the plans we have for the medium and long term, and the reasons behind the decisions we make.

The second point about updates on the children is something we are aware of and will continue to address. When the children are not here, our time is split pretty evenly between communicating with you about the children and preparing and planning for the children.  Both are important of course, and we try and get this balance right, but it can be tricky. Hopefully we can get this one lower down the list next year!

We also had some feedback from Ofsted this term, after a no-notice inspection.  You can read the enclosed report that, once again, says they very much like what we are doing.  We have now had 3 inspections since we opened, but because of the consistent standards they have seen, we are unlikely to be inspected again in the next three years.  From our perspective we are very happy with where we are but have aspirations for each of our programmes that are not captured by Ofsted, and that we continue to work towards.

There is one new member of the team starting in September. Lea Morpurgo is joining us from the Maria Montessori Institute to assist in the Infant Community along with Paul and Tricia. Some of you have already met Lea when she joined us on the Spring Walk. Sarah will still be around and helping with cover from time to time, but wanted to be available to help with her husband’s growing business.

Next term there are some new families joining The Montessori Place; Molly Elliott (Richard & Victoria), Khalil Shawky (Mo & Kathryn), Aurelia Wright (Nye & Lyndsay) are all starting in the Infant Community. Felix Serfaty-Flowerday (Kevin & Claudine) starts in the Children’s House, while Haami Jenner (David & Foujan) will be joining the Elementary Community.

Also joining the Infant Community are Camilo and Zilas who most of you know from the Family Room, or through their sisters Ana and Trinity.  Meanwhile Lila, Max, Joe, Saffron, Pearl and Lili will all be making their way from the Infant Community to the Children’s House. Lila and Max will start in the Children’s House in September; Joe, Saffron, Pearl and Lili after half term. Finally Rudy, Stefan, Walter and Emmeline will all move to the Elementary Community in September, with Nuala joining them after half term.

It is also time for us to say goodbye to Grace who left the Children’s House in July after two joyful years with us.

I’d like to end with an update on our progress towards the secondary school.  It seems like a long time ago now, but back at the start of the Summer Term we held a joint seminar with the Maria Montessori Institute at which Laurie Ewert-Krocker gave an insightful lecture on how the Montessori farm environment so comprehensively met the psychological needs of the adolescent.   There was a great turn out for the event with close to 100 parents and professionals packed into the room.  Many of you were involved in the work to transcribe the audio recording of that night.  The fruit of your labour is the wonderful 15,000-word booklet (book?) enclosed with this letter.

Our search for a property for the secondary school is ongoing, focussed around locations that are within 30 minutes of Brighton whilst also reasonable accessible from London.  Jonathan, Lee, Lucila, Tammy and Esme have joined me on a Property Working Group to help us look.  There will be lots of other ways of helping over the next few years, so if you would like to get involved, please do let me know.

That’s it for now. I wish you a very pleasant end to the summer and look forward to seeing you all again on September 16th.