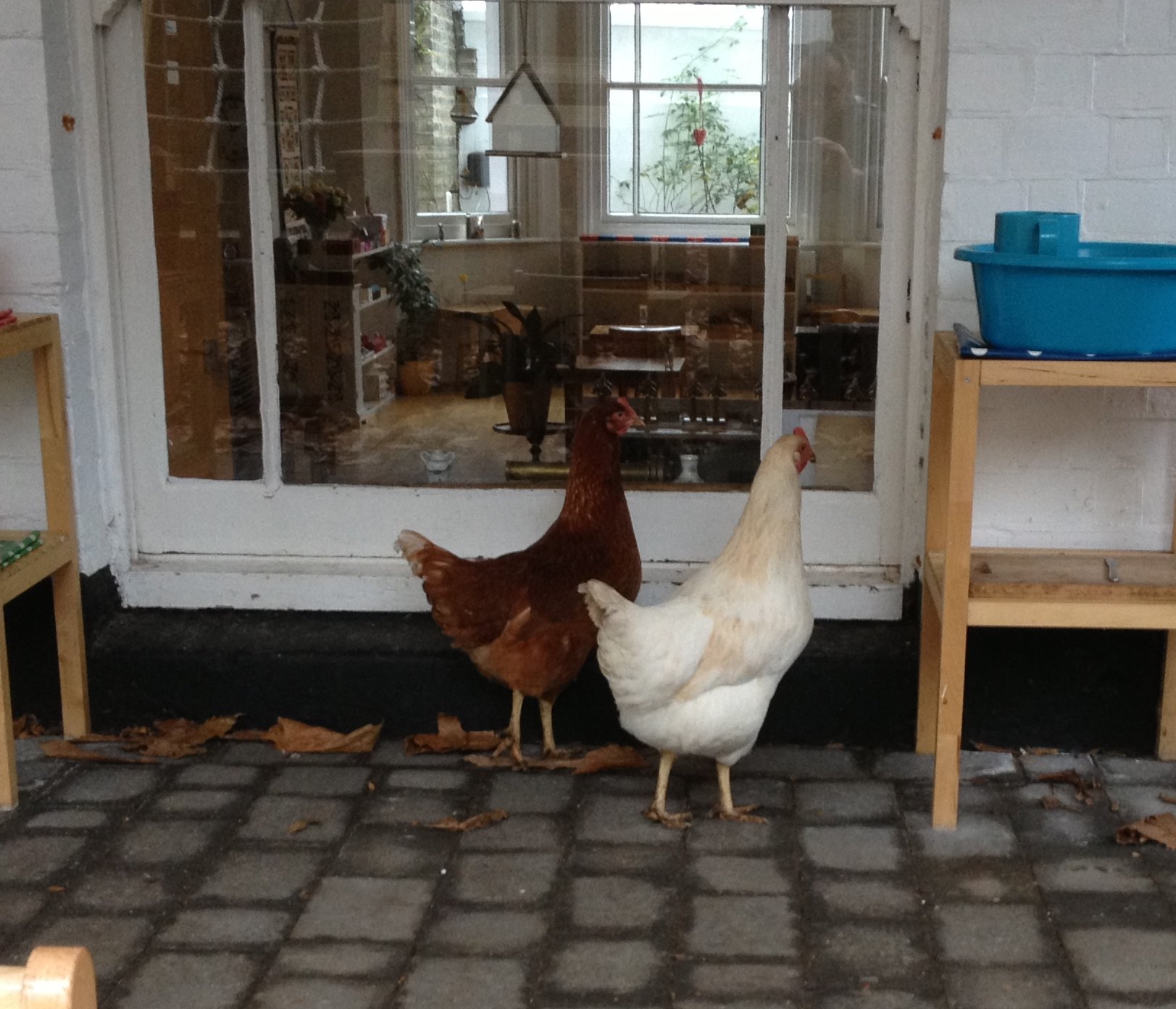 Last weekend I sat for an hour in the garden, observing the behaviour of a hen for the first time.  Of course I’ve seen chickens before but there was something quite compelling about this moment. Perhaps it was the fact that their lives were in my care; perhaps chickens in a Montessori community lend themselves more easily to being observed (with the view naturally to following their interests!); or perhaps it was simply the chance to spend as much time as I wanted nose to beak with a pair of clucking, scratching, head jerking little birds.

You may have read Michael Louv’s book ‘Last Child in the Woods’ which celebrates the role of the natural world in our formative years.  The idea he explores is not new to human thought, but is part of a more recent desire to return to a simpler relationship with the world.   The philosophy of Native Americans and other indigenous peoples have often been held up as fine examples.  One influential text was a 1932 book by the anthropologist John Neihardt and Black Elk, called ‘Black Elk Speaks’.  Yet as an undergraduate, I remember being equally provoked by a paper my professor had published entitled ‘What Black Elk left unsaid’.  He wrote about his experiences with a Sumatran tribe and the indiscriminate hacking he saw as they walked through the rainforest with machetes.   What this told me is that perhaps the attitudes we nurture – whether to wilderness or window box – matter more than the mere presence or absence of nature in our lives.

Why do we want to nurture in our children this sense of respect or reverence for the natural world? The superficial answer is probably that it is the right thing to do – a good thing, a moral thing or even a necessary attitude for our survival as a species.  But underneath that there is something more significant.  Our capacity to understand the needs, feelings and all-round complexity of other living beings evolves with each stage of our development.  Even in maturity this is not easy.  I am sure almost all of the ‘problems’ I encounter in my day to day life stem from being unable or unwilling to look at the situation from a perspective other than my own.

Later this week you will hear the Elementary Children singing ‘The Earth is our Mother, we must take care of Her’, a chant inspired by the likes of the Black Elk.  In a small way, the words of the chant help to reinforce a certain attitude towards the world around us.   However, it is when elements of the natural world become fully real to us that nice ideas become deep-rooted values.  The more we can support children to think about the needs of a guinea pig, a cloud minnow, a hen or any other living being (including their peers), the more we help them to see that the ‘other’ is as complex and real as they are. It is this kind of meaningful contact with reality that results in the spontaneous expression of kindness and considerateness, those fruits of a human heart well tended with love. Gratitude and compassion become the architects of their lives, rather than competition or entitlement.

Continuing with the theme of making our interdependencies more visible, we are planning some changes to our energy supply that we hope will make these processes more real to the children.  Since we opened, we have been supplied with electricity by Ecotricity, ensuring our usage is matched by Ecotricity’s input of renewable energy into the grid.

Caroline Lucas MP became aware of the approach we take to the environment a few months ago and subsequently asked if one of the children could produce a Christmas card that celebrated the role of renewable forms of energy. Cassius responded to the challenge and produced this beautiful design using inks and pencils that place a wind-turbine-powered Christmas tree at the centre.  Caroline Lucas has sent this card to her constituents.

For some time now, we have been looking at how to switch our heat generation from natural gas to biomass.  Happily, we have found a local organisation that is helping us make this transition.  With a favourable response from the planning department, we hope to have the biomass boiler and pellet store installed within 6 months.  It looks likely that the biomass pellets will be made from wood harvested from parks around the South Downs and therefore in easy reach of an outing.  This raises the rare prospect of the children being able to see the whole process of how we meet our need for warmth, beginning with the energy from the sun to grow the plants.

It is on a farm however that all these relationships can be made most visible and have their greatest impact on the young lives in our care. It is here that your adolescent-to-be will be able to experience this interconnectedness at the deepest possible level.  Day by day they will be making decisions as stewards of the land, the rhythm of their lives wholly entwined with the plants and animals in their care.  Most beautifully, this focus on the needs of the animals and plants provides a nurturing counterpoint to the natural introspection of the teenage soul.

The Auction of Promises gave the plans for the secondary school a wonderful boost as well as three hours of laughter.  The £6,357.61 that was raised went way beyond the amount we had hoped for. As I have mentioned previously, we would like to organise a one-day seminar bringing together expertise from the US and Sweden.  Such an event would allow us to flesh out our vision to those who might be able to make significant donations as well as to parents, educators and other eminent folks in the world of education and related fields.  We estimate that an event like this would cost around £10,000 to put on; every pound donated has been a great help towards that.

So many people put so much into the event and fundraising that I can’t thank everyone here by name, but I do want to mention three people: Firstly Caspar who turned the auction into a night at a comedy club.  I am still wondering how he managed to find something original to say about each lot.  Secondly, I must give mention to Esme as the youngest contributor, spending a day baking the delicious mince pies that were sold in the Family Room.  Thirdly, and because it’s still going on, a mention of Ali and her Montessori community cook book.  The latest news is that 17 recipes have been harvested already, with more vegetarian main courses being sought before the end of term.  Her aim is to have the book ready in January.

Next year there will another cookbook being prepared: Freia will be working on a recipe collection featuring The Montessori Place favourites over the years.  The book will also include information on seasonality and good places to buy or forage for many of the ingredients.  It is going to be a mother and daughter production with Freia’s amazingly talented daughter Ani creating the illustrations.

When The Montessori Place opened, Freia promised us a year of her service.  We were delighted when one year became two years, and then three.  But Freia and Jim have for many years been planning to set up a retreat centre in Wales or Cornwall, and want to start directing their energies towards that vision. Freia will continue creating her unique meals until the end of the Summer Term, and will oversee our new chef in the following year. In January we will start the process of recruiting that person to start work in September 2014, under Freia’s oversight.

Come January we will also be saying goodbye to Kristell for a little while.  Orhan, her husband, has been offered a job in the Maldives that they have decided to take for a few years.  Kristell has been on maternity leave since February and was with us when we first opened the doors of The Montessori Place.  She promises that she is coming back; we know she will always stay in touch.   Mizuho, who had been covering Kristell’s maternity leave has decided not to take the permanent position having already spent a number of years in that role at different schools.  Mizuho too has made a wonderful contribution to the lives of the children at The Montessori Place and we wish her well after she leaves us at the end of this term.

At the start of next term you will see Lea Morpurgo at the door each morning since she will be switching from the Infant Community to fill Kristell and Mizuho’s role in the Children’s House.  That leaves a space with Paul and Tricia in the Infant Community.  We are delighted that Stephanie Firth (Trinity and Zilas’ mother) will be joining our team of Guides to take on this role.  This position will allow her to continue her training as she steps into her new career as a Montessori Guide.

Next term we have Tabitha Farthing (Chris & Emily) starting in the Infant Community. Joe, Saffron, Pearl and Lili are now happy members of the Children’s House community, as is Felix Serfaty-Flowerday (Claudine & Kevin).  Meanwhile Nuala has spread her wings and flown up to the Elementary and joined Zoe Foley-Comer (Nadia & Tom) as new members of that community.

On the subject of spreading wings, it didn’t take much observation to realise that our hens Snowy and Woodchip also need a more suitable environment than the one they have been in for the last week. And so over the Christmas break we will be fencing off some more space for them with a view to preparing an environment more suitable for their development – no doubt including elements of the South-East Asian jungle whence their ancestors came.

I look forward to sharing the plays and a meal with you on Thursday.

Best wishes until then,