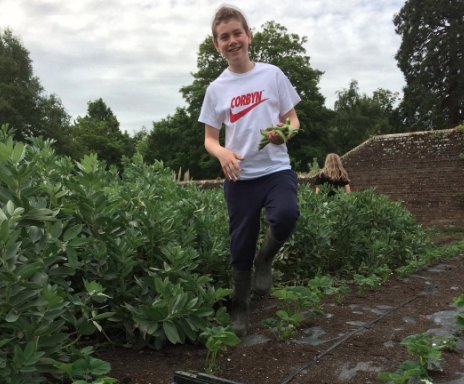 The other day Pete and I moved things around in the prop tunnel. We had analysed the categories of activities in the garden this half term – the five P’s of propagation, bed preparation, planting, protection and picking. Propagation for example is made up of sowing, compost mixing, potting and climate control; while Protection is made up of climate protection (wind, warmth, wetness), pest protection (birds, mammals, insects) and disease protection (fungal, bacterial, nutritional).

The process reminded me of the analysis of movement that the guides do in the Children’s House – the careful breaking down of a process of movement into its parts (how to pour from a jug into a glass); and the analysis of concepts that the guides do in the Elementary – the careful identification of key concepts from which exploration can proceed (what are black holes and how are they formed).

Each week at this time of the year Pete prepares a sowing chart, that lists the different plants we will be sowing from seed, the date it should be sowed by, what kind of tray and soil it is sowed into, how many seeds per container and at what depth. This chart is a table on a single sided A4 attached to a clipboard. Lily May is the Principal Sower – given this A4 chart and the box of seeds she is now independent of Pete.

Last week, unasked by Pete, she opened up the temporary tunnel in the morning (Protection – temperature control). It’s easy for these little acts to go unnoticed but there is a lot happening in that. Lily knew what the plants needed. She knew how to meet those needs. The little motor of Life that keeps turning inside her – as it does in all of the young people – is looking for something to do, some way to act in relation to her world. She is drawn spontaneously – not as a moral idea I don’t think, not out of obedience I don’t think – but as an act of self-expression, to go into the garden and lift the plastic of the temporary tunnel.

This morning as I removed the fleece and watered the plants I thought about ownership, and how it comes about. Having moved things around within the propagation tunnel with Pete the other day, I myself now had a new relationship to it. Perhaps that was the most valuable outcome. The actual layout may be in fact only marginally improved, if at all. The main shift may be invisible – in my altered relationship with it. That altered relationship then brings its own energy, its own momentum. Its that thing called ownership, from which all the rest follows.

How to cultivate ownership has been an ongoing conversation within the team for years. I remember 5 years ago when we first started the adolescent community, we asked the handful of young people what they wanted to grow. The answers included passion fruit and square watermelons – which we attended to and supported, despite it being an impractical choice in Sussex for anyone but a hobby gardener.

In the Children’s House we have a saying ‘Knowledge precedes choice’ – which is to say a child cannot choose something if they do not know what that choice entails. We distinguish between ‘true choice’ and ‘impulsive choice’. True choice arises when there is knowledge. In the absence of knowledge we can have a choice like ‘square watermelons’, but that isn’t a true choice, its an impulsive choice. Choice is a prerequisite for a sense of ownership to develop, but true choice is most efficient, most effective, most sustained. It builds something.

Ownership through true choices can only grow slowly, because it grows at the pace of knowledge that is enacted. And as knowledge grows, so can ownership. Lily has knowledge and ownership that matches. That is the first thing to say about ownership, and it takes place in relation to an individual and their world.

There is another level of ownership, which is that of something bigger than oneself, something that one cannot achieve without help. How do we cultivate ownership of the garden as a whole, by the community as a whole? It is something different from Lily and the polytunnel. The polytunnel is an example of an individual doing what an individual can do. But an individual can only do so much. When people come together and evolve shared purpose, then their efforts are aligned, and there is strength and momentum in that; and there is energy in that. They amaze themselves at what they can achieve.

What are those shared goals, and how do they come about? Language, and conversation, is key to creating shared purpose and in the process of co-creating, there is ownership. When a person engages through conversation and action, ownership grows. The kind of conversation needs to be one in which one can have a meaningful input. It should recognise the expertise one does have. By doing that, ownership grows, and one takes an interest, and then knowledge grows, and then one can do more, and therefore ownership continues to grow and the problem is solved. Once we begin this journey, the problem is solved.

As the community matures, I expect small team meetings to become increasingly central. We have in Lily May a person who has taken ownership of the garden and has knowledge about it that allows her to have a meaningful voice in the direction in which the garden grows. When her actions are independent of us adults, then she is out there in the garden as a free individual, a free human being, acting in response to her environment. And that is inspiring for the younger ones. They will follow her, because she is one of them. It is the same with Isaiah in the woodland, and Eva in the kitchen. Wherever there is individual ownership, it is a space in which to grow community ownership. Ownership can show up in relation to the organisation of social events, the way a shelf is set up, how dishes are put away.