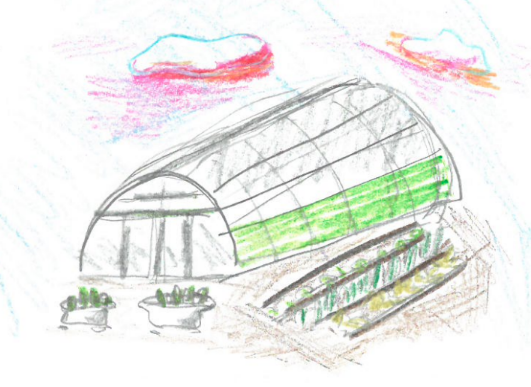 This term the garden crews are under pressure. To work hard, to be independent, and to be thoughtful. Thoughtful of the veg, and of each other. As a group we’ve responded well. We’ve bounced like a beach ball, and are now aimed for the stars. As we grow as people, the plants respond, giving us the best series of crops we’ve seen yet.

At the moment, in full fruition, the garden holds a combination of kale (two varieties), radishes (the slug’s favourite), rainbow chard, spinach, and a bunch of different salads. As we pick these, thanks to the morning crew, we now have tiny versions of these sprouting up beside them yet untouched by the slugs.

This Monday when I was preparing some rainbow chard bags I noticed the leaves were torn too ragged to be the work of a slug. Confused I shrugged and moved on. Later when Isaiah and Lily May were picking spinach they noticed the same again, this time with a big seedy dollop of poo to boot. This is how we discovered we have a Pigeon Problem.

Since then we’ve seen the culprit. A large grey bird perched on top of the polytunnel. Pete pointed it out to us while we were hoeing the weeds (also loving the good weather). “Are you sure that is not a buzzard?” I said. “No, its definitely a pigeon” came the reply.

As well as working in the field and polytunnel this week, we have progressed in other areas. Sola and Lily (our junior herbalists) have moved on with their herb garden which is niftily located in two large bathtubs. The tubs were originally inside the building but when we renovated it was discovered that people prefer showers and so out went the bathtubs. Now instead of water they contain five different varieties of mint each (I’ve been told one of them tastes like pina colada) and will soon have lavender joining their ranks.

That is it from me this week. I hope to see you soon, hopefully when the strawberries are ripe.