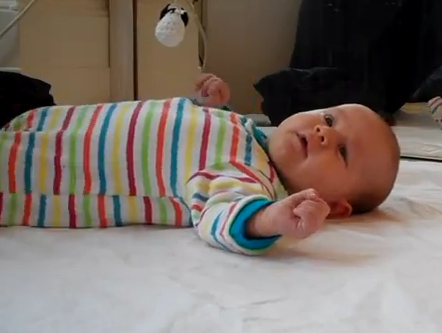 Camillo had just discovered his hands, which is what happens with most babies around this time. The process of myelination is now reaching his fingers. Myelin is a fatty sheath that surrounds a nerve, like the insulation around electric wiring – it makes sure that the instructions sent to a muscle actually get there. The nerves are all in place at birth, but the myelin isn’t, and that means that there is no communication taking place between the brain and the voluntary muscles (except for the eyes and the mouth at birth).

One of the many beautiful facts about human development is that the process of myelination is staggered over many years. Which means two things in practice: (1) that babies are presented with limited amounts of information from their senses and that the amount of information their senses submit to them for processing increases as they grow in capability; and (2) that babies have no possibility of exerting control over a part of their body that is not yet myelinsed, but they do experience that possibility once that part is myelinised.

Isn’t Life so wise? At each stage it offers the child as much as they can possibly manage, but no more. And so to grow, to develop, is always to exert oneself against present boundaries, to stretch, to become more and more who we have the possibility of being.

In the Montessori world, we use the expression “follow the child”, which is in a sense to SEE, to see what they are developmentally capable of and interested in, and to then offer them experiences (physical, psychological) in which they can playfully, joyfully and freely choose to exercise all the capabilities that are unfolding within them. For a child, to possess an ability is no different from putting it to use. Once the heart comes into existence, it beats, and it never stops beating. Once a child can crawl, try stopping them!

So in this case, in this video, since Camillo is 8 weeks old and is generally displaying the characteristics one would expect to see in an 8 week old, I wanted to offer him something that will invite his newly-myelinised arm to get to work. So I strung up a black-and-white rattle on a piece of elastic and offered it to him as a “grasping mobile”.

It doesn’t have to be black and white because he is starting to see colours quite well now, but it is nice that it is a rattle with a pleasant sound. From his perspective he gets two points of feedback if he strikes it – one, the feel of the rattle against his hand, it is soft because it is made of wool; and two, the sound of the little bell that is inside this wool rattle. Camillo will be able to put two and two together. After all, he is an intelligent 8 week ‘old’!

Camillo is observant and watchful at the start of the video but doesn’t really notice the mobile, or at least he sees it in the same way he sees everything, it is just something, another object, with no more meaning than any other object. He is more drawn to my face at that point, studying it carefully, his body is quite still. I want to give him the idea, plant a seed in his ‘mind’, that his hands can do something new now. So I bring the rattle to his hand, and strike it against his hand, to give him the idea that this is what can happen. He then accidentally strikes it a couple of times. No doubt he hears the sound and rapidly associates it with the feeling of striking the rattle. By 1:20 in the video, he becomes aware of the mobile in a new way. Watch his head turn and his body grow quite still. Then by 1:30 he is actively trying to reach it.

It is tremendously exciting to see something like this. Each time I see a moment like this I am reminded that awareness and intentionality are gifts we all come into the world with. When does intelligence begin? To have an idea in one’s mind,  to execute on it. To try again, to prove to oneself it wasn’t by chance. And thus, one grows in power and confidence.

By the end of the video dear Camillo is so exhausted by his effort,  he starts to cry!